Historically, my practice included the entire range of Criminal work. I defend at all the Crown Courts in the South East and most of the country. I have appeared in several murders as a junior, including ‘gangland’ shootings; that of a baby boy and a case of murder and attempted murder which attracted widespread publicity in which two students were thrown off Hungerford Bridge, all at the Old Bailey. I appeared in a ‘neighbour dispute’ murder in Birmingham. I have appeared in many rape cases both alone and being led. I have defended in every type of fraud case, including complex matters lasting up to four months, both as junior counsel alone and being led by silks and leading juniors. In the late 1980’s I appeared in two of the biggest ‘football hooligan’ trials – being led by Victor Durand QC in the ‘ICF’ (West Ham) and alone in the ‘North Sea Ferry Affray’ at Chelmsford.

As a leading junior I have been instructed in a number of high profile cases for the defence:-  a man said to be the most successful counterfeiter of Bank of England bank notes that there has ever been; a series of  armed robberies on sub post offices during the night; large drugs importations and so on.

I prosecuted for the CPS in London and the Thames Valley (Grade 3) and was on the Attorney General’s list to prosecute for the Department of Social Security and the Revenue.

I have conducted many multiple defendant organised fraud cases and was once selected to prosecute a member of the Bar for such an offence. Like my defence practice, my prosecution work has included frequent appearances in the Court of Appeal.  I have also been involved as counsel in several appeals to the Judicial Committee of the Privy Council on behalf of prisoners sentenced to death in the Commonwealth; two of those appeals have been successful.

I have considerable experience through my practice of dealing with the mentally ill and am familiar with the various sentencing options available to the courts under the Mental Health Act. I am computer literate and have a good understanding of science and technology. I have been involved in a large number of hearings under the Proceeds of Crimes Act, both prosecuting and defending.

I still undertake some criminal work (usually, but not always, firearms related) but now I mainly specialise in firearms licensing appeals in all parts of England and Wales. I am recommended by most of the major shooting organisations for this type of work. This includes appeals against the refusal to grant or renew firearms and shotgun certificates and registered firearms dealerships and judicial review of police decisions where necessary. I advise firearms related businesses as to the legal requirements which are appropriate to their activities. I also advise and appear in cases where those previously convicted of serious offences  wish to have their prohibition from possessing firearms (by virtue of Section 21 of the Firearms Act) removed. Because of my extensive practical knowledge of firearms I am often instructed in criminal prosecutions which involve the use of guns. Since the introduction of ‘Marine Marshals’ on British flagged vessels I have advised organisations seeking such work on a number of occasions.

In 2011, together with Helen Dobby, from 4, King’s Bench Walk and Laura Saunsbury, the well known firearms licensing solicitor at Lewis Nedas Law, I co-authored The  Firearms Law Handbook, published by Sweet & Maxwell. The book is recognised as the leading work both for lawyers and the public regarding firearms law and licensing in this country. Laura and I have now completed our second edition which was  published by Wildy, Simmonds & Hill in August 2019.

30 years of involvement in Firearms Licensing has led me into other areas of Regulatory Work. This has included advising on noise nuisance, particularly in relation to shooting grounds and the like. I have also advised in relation to fatal shootings and accidents at ranges and game shoots and consequent prosecutions under the Health and safety at Work Act. I have recently acted for the defence in a high profile prosecution under the Act relating to the storage and sale of explosives, and the attendant risk to the public, at one of the largest militaria events in Europe. As with my firearms work, my understanding of engineering and technology allow me to give relevant practical advice. I have both prosecuted and defended in Health and Safety cases.

I keep up to date with the law by attending frequent courses. I give lectures and seminars on a number of topics relating to firearms law and licensing. I shoot regularly and for 8 years was the Chairman of The Kensington Rifle and Pistol Club. I am now the Chairman of the National Liberal Club Shooting Club. For the last 10 years I have been the only ‘common law’ International Legal Advisor to the CIC, the International Game and Wildlife Commission. My memberships include the Criminal Bar Association and the Agricultural Law Association.  I am a Liveryman of the Worshipful Company of Gunmakers. 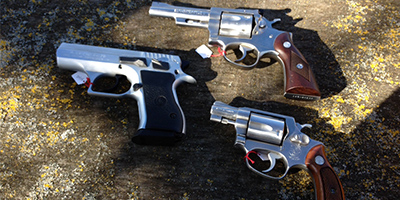 C of A on sentence and to the Divisional Court regarding reporting restrictions.

R. v. Sterling 2011 Reading Crown Court – Leading in one of the longest running allegations of conspiracy to supply drugs ever seen in England.

R. v. Rehman & Others 2014 Successful prosecution of a 4 handed conspiracy to rob members of the public attempting to purchase cars rom websites.

The defendant was convicted on a lesser charge relating to possession of a prohibited weapon which I appealed and is now the leading case regarding breach of conditions on a firearm certificate:- [2014] WLR (D) 5333.

R.v Heddell [2016] EWCA Crim 443. Important judgement on the effect of the Firearms Act 1982 in relation to imitation firearms following the decision in Bewley [2012].

R. v. L Wolverhampton CC 2017. Successful defence of a certificate holder who used a lawfully held rifle to scare off persons attacking his family. The violence threatened under S.16A of the Firearms Act has to be unlawful, this was lawful self defence.